2 NEW MENUS TO TRY IN GLASGOW 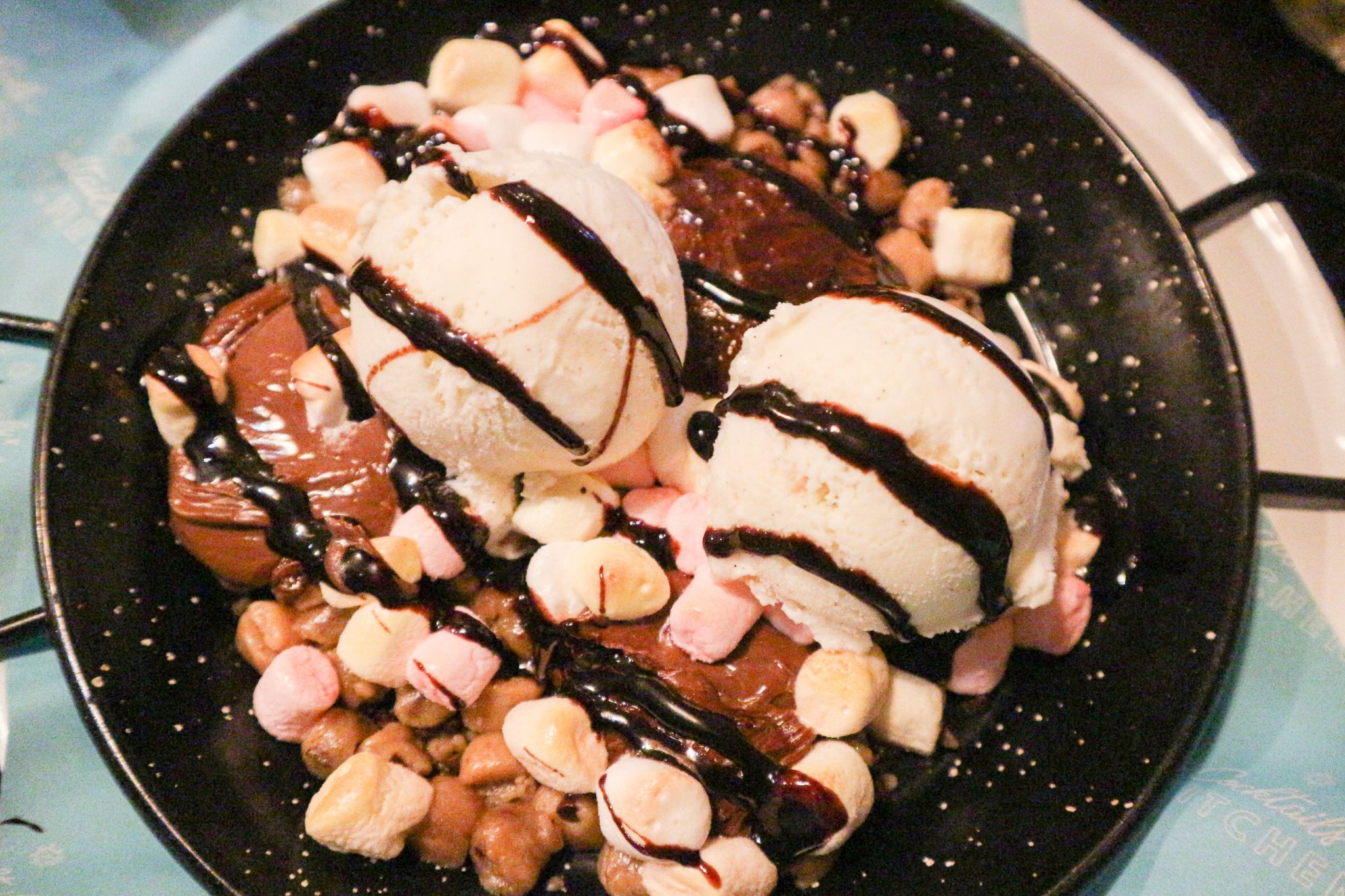 I’ve been out trying some new food menu launches across the city this month, and I wanted to share two of them with you. Revolution Mitchell Street is the latest venue from UK-wide Revolution Bars. It has a cool, laid-back vibe with American and Tex-Mex offerings. The Tron Bar & Kitchen – the Tron Theatre’s restaurant – has had a facelift and a new menu. This cool, artsy venue focusses on small plates with a Scottish element. Revolution (see the venue here online) is such a cool place to grab a meal or a cocktail (or both!). They have new food and cocktail menus that are full of comfort classics with a twist and some unique new additions. There are some really Instagramable items! David went for The Smoke King burger with skinny fries* (£12.50). It’s served in a bell jar that gets lifted off at the table, releasing all those wonderful smells. The burger is three beef patties with a nacho cheese sauce, bbq sauce, streaky bacon, crispy onions, bacon bits in a poppy seeded brioche bun with salad and mayo. It’s a really messy burger to eat, but he managed not to drop any down his t-shirt. He said that the beef patties were juicy and great quality, and that the nacho cheese sauce had a nice bit of heat to it. His dinner looked amazing and I was very jealous when mine arrived. I opted for a classic – Mac ‘n’ Cheese* (£8.50) with Cheesy Garlic Bread* (£4.50). It was nice but it was very average, and the portion of pasta was quite small as the dish it was baked in was very shallow. I should have gone for something else instead, and I will definitely return to try that epic burger. Bottom line is – don’t go here and choose Mac ‘n’ Cheese as there are far more exciting and bigger options on the new menu. Some epic burger combinations and sharer plates! For dessert, I had the Cookie Dough Smores* (£4.25, pictured above) – the most incredibly indulgent and wonderful dessert ever. It has chocolate chip cookie dough pieces, with warm nutella, melted mini marshmallows, chocolate sauce and vanilla ice-cream. Yum! For dessert, David had the Bombshell Brownie (£4.25) and he LOVED the fact that it had playful popping candy on the plate. There’s warm chocolate brownie bites, with salted caramel chocolate sauce, honeycomb chunks and chocolate ice-cream. We also tried one of the new cocktails each. David went for a Zombie* and it was quite the theatrical affair. It had lit Tiki Fire Rum, producing a lovely blue flame, which was then turned into a sparkler by sprinkling on some cinnamon powder. This cocky smelt and tasted of Christmas in the US to me. All those warm, sweet scents! It contained Old J Spiced, Gosling’s Black Seal, Bacardi Costa Blanca,  Old J Tiki Fire Rum, Pineapple, Cranberry, Lime, Grenadine Syrup, Angostura Bitters and Cinnamon.

I went for a Bird Bath* as it looked so pretty. It’s very sweet and tastes exactly like the blue Slush Puppies (the raspberry flavour ones). I loved the cute little bird and dried rose petals on top, and it contained Bacardi Raspberry, Blue Curacao, Coco Real Coconut, Pineapple and Lime. Over at the Tron Theatre, David and I visited the reinvented Tron Bar & Kitchen. It’s a modern menu of small plates with a Scottish twist. It’s recommended that you order three small plates between two, plus a couple of sides each. We ordered more as we had a testing job to do! The plates come out as and when they are ready – do not all at once – but you’ll be grateful for this as there isn’t much table room. You get three small plates for £14, or for £5/6 each. The first three small plates we tried were – Curried Cauliflower Cheese, Vegetarian Haggis Fritters and Ayrshire Chicken Croquettes. The curried cauliflower is delicious and has just a mild, creamy curry sauce and some Bombay potatoes with it too. This was David’s favourite dish. The Vegetarian haggis was full of flavour and was a blend of spiced beans and pulses. They are served with a kale and potato stew. The chicken croquettes were also so tasty, and they went well with the barley risotto they are served on top of. This risotto will probably remind you of your Mum’s chicken soup. It has all the consistency and the flavour to reminisce over. The last three plates we tried were – Beer-Battered Haddock, Slow-Braised Beef Shoulder & Haggis Wellington and Pam-Fried North Atlantic King Prawns with chilli and sourdough bread. The prawns were my favourite dish as the tasty oil they were in has a lovely chilli heat, and the sourdough bread is perfect for soaking it up. The beer-battered haddock was an excellent dish – the portion was generous, the fish was great quality and ‘meaty’, and the batter was so crisp and fresh. The Wellington wasn’t a dish I loved as I felt it was greatly overpowered by the haggis, and it just felt too much. The slow-cooked beef however was amazing- it just doesn’t fit with its haggis partner. For dessert, we had the Vegan Chocolate Brownie (£5). This was so moreish and delicious – you would never know that it was Vegan, as it’s a real chocolate-y treat!

There is something for all tastes at the Tron Bar & Kitchen, and plenty of Vegetarian and even Vegan options too.

These meals were complimentary for review purposes, but all opinions are my own.

To see more of what I’m loving, and what I’m doing, check out my Instagram.